Lithium bromide (LiBr) is a chemical compound of lithium and bromine. Its extreme hygroscopic character makes LiBr useful as a desiccant in certain air conditioning systems. 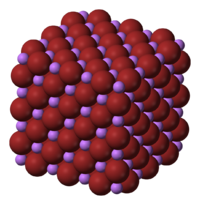 Lithium hydroxide and hydrobromic acid (aqueous solution of hydrogen bromide) will precipitate lithium bromide in the presence of water.

Lithium bromide was used as a sedative, beginning in the early 1900s, but it fell into disfavor in the 1940s when some heart patients died after using it as a salt substitute.
Like lithium carbonate and lithium chloride, it was used as treatment for bipolar disorder.

Doses as low as 225 mg/day of LiBr can lead to bromism.

Lithium salts are psychoactive and somewhat corrosive. Heat is quickly generated when lithium bromide is dissolved into water because it has a negative enthalpy of solution.